The Museum of everyday life

Home  /  The Museum of everyday life

Among the many definitions used by Ettore Guatelli to describe the collection named after him, a frequent one was the “museum of the obvious” or the “museum of everyday life”.

In fact, the objects he recovered and displayed were not rare or precious pieces like those of many traditional museums, but objects of common use, which still now bare the impression made on them by those who used them every day and wore them out to the point of making them a part of themselves.

Hammers, pliers, blades, scissors, barrels, and cutting boards cover the walls following simple geometric patterns, and fill up the furniture and shelves of this museum, creating a scenic effect full of visual suggestions that evokes, through a museographic language totally original and free from realistic intentions, everyday gestures of peasant life. 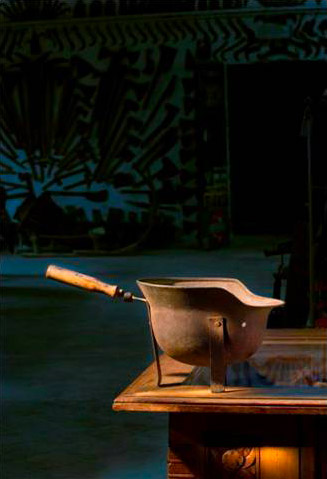 The objects kept in the Guatelli museum bear witness to the common history of men and women “of the age of bread”, when farm work gave substance to the profound bond between humans and life. And at the same time, those objects allow us to reconstruct the imagery of those who, so deeply rooted in the traditions of their own land, were capable of envisioning from the head of a leopard or a shell collected at the museum, an exotic far away world, something they often only heard about from tales.

Work dedicated to searching and collecting the objects was then finalized to the recovery of “immaterial goods”, handed down especially through the stories of those who owned those items. By preserving objects of a peasant pre-industrial and artisans’ world on the brink of disappearing, and by collecting records that belong to them, Guatelli was able to guard ancient knowledge and ways of living that up to that time were entrusted only to spoken words.

Guatelli succeeded in returning the cultural heritage of a social group using the same language of those who had passed it on to him by telling their stories.

The Foundation and the Association of the Friends of Ettore Guatelli intend to keep alive the spirit of this cultural feat by making sure that the objects of the museum can still tell those revolving everyday stories.

All information to visit the Guatelli Museum: opening hours, prices, how to reach us...