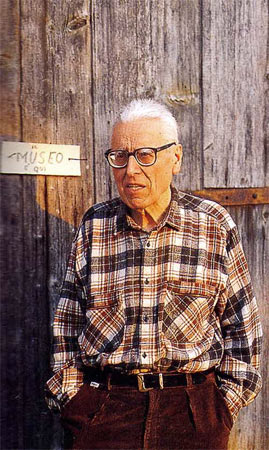 Ettore Guatelli was born in Collecchio on 18 April 1921 (1921 – 2000). His scholastic education was intermittent, due to health problems that prevented him from pursuing farming work – an activity that would have been natural for a son of farmers – and to attend school regularly. Primary school teacher, collector of objects and stories, ethnographer, visionary museographer connecting stories and objects, who discusses with poets and professors, photographers and graphic artists, artisans, farmers and second-hand dealers.

Ettore, the son of a farmhand from Ozzano Taro, in the province of Parma where the rural compound that houses the collection is located, met Attilio Bertolucci, who became the most important reference figure in his path of growth. Guatelli typed what Bertolucci dictated to him and in exchange, the poet tutored him for the exam of secondary high diploma in pedagogy. He was a frequent visitor of the storage areas in the Apennines where dealers collected second-hand objects. At the beginning, it was just for curiosity, then to save from destruction furniture, objects and tools that came from the homes of farmers and artisans’ workshops. He ended up collecting over 60,000 items.

His sickness and the repeated postponement, however, did not prevent him from being drafted in 1942 as a private. He deserted the army after 8 September 1943 to take part in the antifascist movement. During those years, he met Attilio Bertolucci in the hospital, and he became the main reference in his journal of education. Eight months afterwards, in 1945, having studied also as autodidact, he got a degree as a teacher.

At the end of the war, he spent a few years on Lake Maggiore, guest of a cousin. He started then, to make a living, to deal in war relics. In 1948, once again seriously ill, he stayed at sanatoriums in Jesolo and Cortina D’Ampezzo, where he met many people, who told him stories of life and work that often inspired Ettore’s tales about the objects he collected.

In the fifties, he entered local politics. He was elected council member at the municipality of Collecchio. In those same years, a group of literati and intellectuals from Parma (Artoni, Bertolucci, Bianchi, Colombi-Guidotti, Cusatelli, Petrolini, Tassi, and Viola) started to meet at Guatelli’s home to read his diary and publish some parts of them.

When he was director of the children’s summer camps in Bedonia and Tarsogno (1951-1971), Guatelli started to make regular visits to the warehouses of the Apennines’ second-hand dealers. At the beginning just to poke around and trade, but later to save from destruction furniture, objects and tools that came from upgrading of farmers’ homes and artisans’ workshops. In 1968, after long years of being a substitute teacher, he won the competition for a permanent position and taught at primary schools until 1977, the year when he retired.

In the mid-seventies Guatelli’s collection started to attract the attention of local residents, public bodies and scholars. In the meantime, as the first articles started to appear on local papers, Guatelli became more aware of his work as local collector and gatherer. In fact, unwittingly, he found himself involved in the movement of rediscovery of material culture that has characterized the seventies and eighties.

Up to the year of his death (September 2000) Ettore dedicated body and soul to his opus, collecting, accumulating, welcoming guests and visitors, setting up over and over again rooms and walls. In those years he obtained recognition and was mentioned in books, magazines, academic classes, and graduation theses.

In the nineties, the Museum of Ozzano Taro enjoyed a strong presence on the museographic and ethnographic national scene.

In 2003, 3 years after his demise, a Foundation bearing his name was created and today it manages the museum and promotes the enhancement of his cultural heritage.

All information to visit the Guatelli Museum: opening hours, prices, how to reach us...